Julius Hebbel (1853-1905) opened a photography studio in Baltimore in the later 1870s, and the business continued to operate under his name well after his death. I have also found references to Hebbel as a photographer in Westminster, Maryland.

Hebbel was born in Germany and immigrated to Baltimore with his family. His father was a grocer.

I have a soft spot for Julius Hebbel because this family photo was the first on which I noticed a photographer’s name.

Hebbel is buried in Baltimore’s Loudon Park Cemetery. Even his headstone reflects the flair of his signature mark on the photograph’s mount. 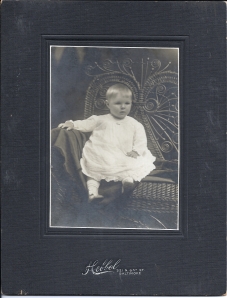