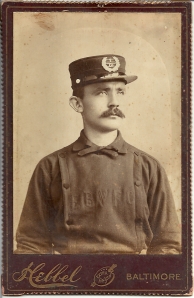 This cabinet card photograph by Julius Hebbel was probably taken sometime between 1889 and 1920, when the Hebbel studio was located at 409-411 Gay Street in Baltimore.

The diamond die-cut border, chocolate brown mount, and elaborate, art nouveau flowers-and-vines advertisement on the verso suggest a date of 1890-1905.

The photographer chose a head-and-shoulders pose on a simple cream background, allowing the fireman’s uniform and gilt-trimmed cap to provide the portrait’s only embellishment.

The youthful, unidentified sitter looks off into the distance, as if scanning the horizon for smoke.

The initials on the sitter’s woolen bib-style shirt, E. B. V. F. C., don’t  match the names of any Maryland localities, according to my contact at the Maryland State Firemen’s Association.

“More likely,” he says, “is the probability of a visiting company from another state, most likely attending the Maryland State Firemen’s Association convention, several of which were held in Baltimore.

“It was not uncommon for companies from as far as New Jersey to send apparatus and manpower for these festive occasions. The conventions of old not only held parades, but also firematic contests such as hook up teams, pumping teams, and ladder teams. These contests were a source of great pride and usually attracted companies for 100 miles or more.

“Thus, [the company] most likely was from out of state. It could be East Berlin, PA located in Adams County, PA as I believe that company dates around 1890. They do use the number. one, but actually are incorporated at the Liberty Fire Company.

“It could also be East Brunswick, NJ, founded in 1906 that actually goes by Fire District No. 1. Either of these companies, or a variety of others, could be the mysterious EBVFC.”

If you have an idea which fire company is represented by the sitter’s shirt, please leave a comment.