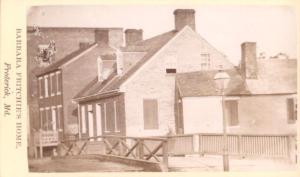 According to the Maryland Online Encyclopedia, Frietchie’s home was destroyed in an 1868 flood of Carroll Creek, and not rebuilt until 1927. This photo had to have been taken prior to the flood.

The photo is identical to the one used on a similar souvenir carte sold by J. Davis Byerly’s father and founder of their Frederick studio, Jacob Byerly. Collector Gil Barrett allowed Maryland photography historian Ross Kelbaugh to reprint an image of the carte in Kelbaugh’s 2001 article on Byerly and Frietchie for the Daguerreian Annual in 2001.

There is a difference in the prints. This print appears to contain areas of damage in the upper lefthand corner. Since the damage is not to the print, it must be to the negative. Byerly, who took over his father’s business in 1868, must have continued to make prints from the same negative his father had used.

Thanks to what we know about the destruction of the house and the Byerly business, we can safely date the photograph here to the period 1863 to 1868, but the carte itself could have been sold anytime between 1868 and 1899, when Charles Byerly, son of J. Davis, took over the business started by his grandfather in 1842.