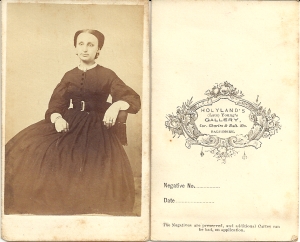 In 1865, at the age of 24, Baltimore photographer John Holyland sold the Washington, DC studio that his father had purchased for him and returned to the Monument city.

Young Holyland bought the J. H. Young studio at 205 West Baltimore Street–the same studio where only a few years before he had first learned the photographic craft.

The back-mark on this carte de visite says “Holyland’s (Late Young’s) Gallery,” so it probably dates from within a short time after Holyland came back to Baltimore.

Since there is no revenue stamp, it must have been taken after the tax ceased being collected on 1 August 1866.

The young lady may be posed so as to feature the ring on her left hand–possibly an engagement ring. Her hands stand out against the dark stuff of her full-skirted dress.