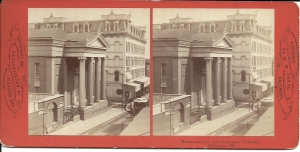 According to a reference I found on the wonderful Baltimore Architecture Project website, this church was built in 1844 and torn down ca. 1885. This reference text, a slim 1982 softcover labor of love by Carleton Jones called Lost Baltimore Landmarks: A Portfolio of Vanished Buildings, is well worth acquiring for those interested in identifying Baltimore architecture.

Scharf’s History of Baltimore City and County relates that the Light Street M. E. congregation bought the Charles Street church building in 1869 in order to make way for the extension of German Street.

It is well-known Baltimore architectural and Methodist history that this congregation, led by Rev. John Franklin Goucher, commissioned  Stanford White to build a new church beyond North (Boundary) Avenue at 22nd and St. Paul streets in 1882.

Based on the style of Chase’s mark and the orange color of the mount, I’m guessing this photo was taken in the 1870s. Note the horse-car in the foreground, the horse’s figure blurred by its motion. Horse-cars were introduced to Baltimore in 1859, and were in use until replaced by electric trolleys ca. 1890.