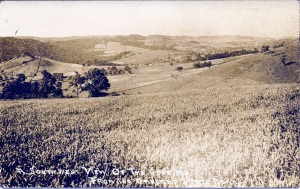 Even without his name or the words “Mt. Nebo Studio” on the back, his distinctive handwriting marks this real photo postcard as the work of  Leo J. Beachy (1874-1927).

Following the wisdom of  RPPC  dating experts, “A Southwest View of the Cove, Md., From the Oakland State Road,” with its divided back and bordered CYKO stamp box, probably dates from ca. 1905.

Beachy seems never to have tired of the endlessly unfolding views from the State Road above the rolling farmland known as “the Cove,” and its vistas continue to be popular today.

Pinpointing the exact vantage point  near Oakland will have to wait for someone intimately familiar with this stretch of  US 219, aka Garrett Highway.

During the period Beachy took this photograph, 219 was still known as the State Road. South of Oakland, the road took a route different from its later incarnation: it snaked out of Oakland via 3rd Street, became Underwood Road, then swung east up Monte Vista Road.

For more about Beachy’s photography, life and the dramatic story of how his niece, Maxine Beachy Broadwater, rescued a portion of his almost forgotten work, see my earlier posts on Leo J. Beachy.

Then visit the online galleries of Beachy’s photos at the Garrett County Historical Society, where you can purchase prints of any of over 2,800 of his images. In them one glimpses the great and reverent affection Beachy  felt for the land and the people around him.