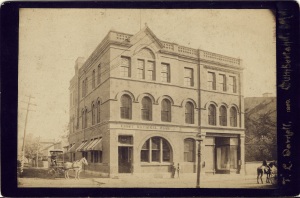 Considerable confusion exists because of the history of the reorganization of various banks in Cumberland over the centuries. I’m not  going to attempt to reconstruct this history here beyond its direct relevance to the two buildings.

Now back to our photograph. During this period, according to Ross Kelbaugh’s Directory of Maryland Photographers,  the studio of Thomas L. Darnell (1825-1908) was located at 96 Baltimore Street in Cumberland, and I’ve found other Darnell cabinet cards with the location 106 Baltimore Street.

Darnell includes a few figures to add life and scale to the scene, which captured the building’s facade with the sun full upon it. Only slight shadows in casement corners pick out the lines of the high, handsome, leaded double-height windows.