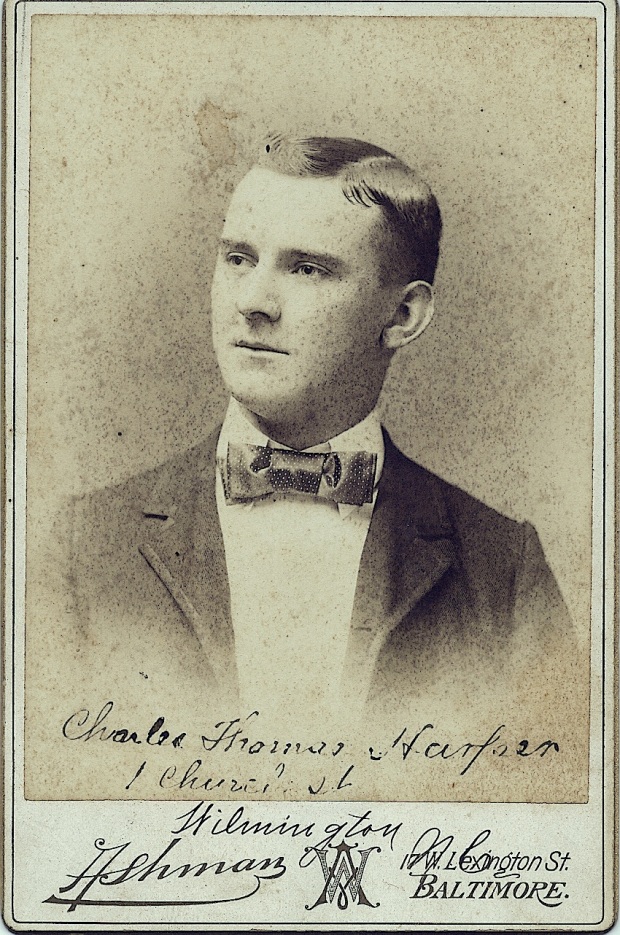 Harper might  have made a present of his cabinet card portrait to a friend while studying medicine in Baltimore.

After a period of pre-med study at Davidson College in Davidson, North Carolina, Harper earned his medical degree from the University of Maryland in 1894. He married Jessie Glenora Zimmerman in 1895,  and they remained in Baltimore for a number of years.

By 1900, Harper and his wife and daughter Jessie returned to Wilmington, North Carolina. Dr. Harper’s family was prominent and prosperous. His father, Capt. James Thomas Harper, ran a tugboat service, was a partner in the  Boney & Harper Milling Company and proprietor of the Wilmington Steam Laundry.

Capt. Harper built a home at 5 Church Street, today known as the Harper-Newbold house,  in 1905.  He also owned the Wessel-Harper house, 508 Front Street.

But it was at 1 Church Street, a sprawling 1828 house backing onto the Cape Fear River, that Charles Harper grew up.

Dr. Harper’s granddaughter, Anne Newbold Perkins, remembered the house, which remained in the family from 1882 to 1992,  as a center of activity for the neighborhood children,  “a big old house . . . a wonderful house, fourteen rooms- no central heat. So you were either freezing or burning up. And we just had a good time there” (2006 oral history of Anne Newbold Perkins, William Madison Randall  Library, University of North Carolina Wilmington).

Charles and his family moved back into the big Harper home with his parents and sisters, Mary and Anna.

Once settled back in Wilmington, Dr. Harper took a leading role in matters of municipal health as well as county and state medical affairs. He served as port physican and superintendent of health for the City of Wilmington and was a member of the North Carolina State Board of Medical Examiners.

In 1910 Harper founded a small sanitorium, in a Second Empire-style building at Front and Castle streets, where, ironically, he died of complications from an appendectomy in 1915.

After his death, the Association of Seaboard, Airline and Railway Surgeons published a memorial  to Dr. Harper in the  International Journal of Surgery:

“Dr. Harper was a lovable and strong man, and was always willing to bear the infirmities of the weak and lowly. His genial personality and bright disposition endeared him to all who had the pleasure of his acquaintance  . . . Among the profession he was universally popular” (International Journal of Surgery, v. 28, 1915).

Charles T. Harper and his wife Jessie are buried in Oakdale Cemetery, Wilmington, North Carolina, along with their daughter, Jessie Harper Newbold.

Ashman’s operator used the very popular vignette style, which burned out the background so that the figure seems to float. Curiously, Harper’s bow tie remains the most vivid thing in the photo–the tie seems so real you can almost imagine reaching in and touching its shiny folds.