If the image on this tintype is, as I think possible, Charles Harvey Stanley (1842-1913), then the operator at D. W. Culpepper’s gallery captured the 24-year-old not long after he mustered out of the Confederate army, ca. 1866.

If you look at the two other photographs of Charles H. Stanley that are accessible on the web, his distinctive hairline is the same, but on the opposite side. The technology of tintype photography explains this: Tintypes turned a negative image into a positive, so the image is reversed left to right.

One can trace a few faint lines of penciled signature behind the ink. The ink signature is not identical to the one he provided for his portrait and biographical sketch in volume one of 1907’s Men of Mark of Maryland, but there are similarities. If this portrait was a gift to his younger sister Eliza Stanley (1850-1928) she may have inked over the original pencil inscription.

Born in Saybrook, Connecticut but raised in St. Mary’s County and Laurel, Prince George’s County, Maryland, Charles was the son of an outspoken southern sympathizer, Rev. Harvey Stanley (1809-1885). Stanley was rector of Laurel’s Holy Trinity Episcopal Church from 1851 until his death.

During the run-up to the Civil War, Prince George’s County had the highest population of enslaved African-Americans in the state, and much of the white population identified with the Confederacy.

So, clearly, did Charles Stanley. In 1862, he traveled to Virginia to enlist  in the Confederate forces. He joined Company B of the First Maryland Cavalry Regiment and served until the southern forces surrendered in 1865.

By all accounts, Charles Stanley integrated easily and successfully into post-war Prince George’s County life. He studied law,  developed a prosperous practice, and became involved in many of the civic institutions of the county and the state. He was deeply interested in education, and was president of the Prince George’s County Board of School Commissioners as well as a trustee of the Maryland Agricultural College.

During his long career he was also elected to the Maryland House of Delegates, served as mayor of Laurel and as Comptroller for the State of Maryland under Governor Austin L. Crothers.

Both of Charles Stanley’s wives came from southern planter families with deep Maryland roots. Ella Lee Hodges (1844-1881) descended through her mother from some of the founders of Anne Arundel County.   His second wife, Margaret Snowden (1858-1916), was descended from one of the earliest settlers and largest landowners in Maryland, Richard Snowden.

Raised in Maryland’s plantation/slave economy, Charles fought for that way of life and married into it. He and his second wife, Margaret (Snowden) Stanley are buried at Ivy Hill Cemetery, Laurel, Md., in the heart of a region that today, ironically, boasts  the  most highly educated and “wealthiest African American-majority county in the United States.“ 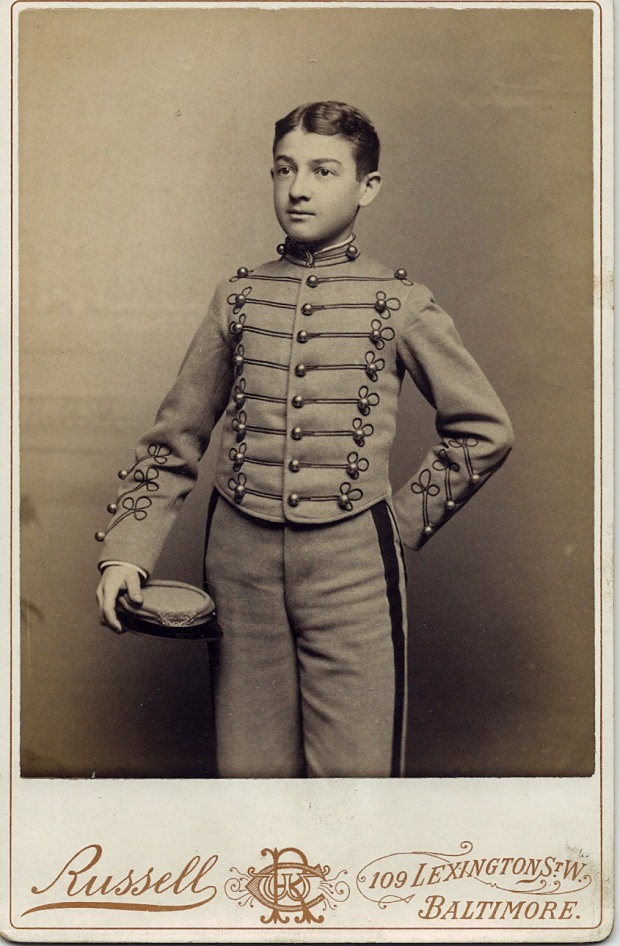 The period-ink notes on the back of this cabinet card photograph identify the subject as  “Lee Duvall, April 22, 1892, Laurel.”

Mareen DuVal  or DuVall (b. 1625) arrived in Anne Arundel County in 1650. When he died in 1694, he left a vast estate of land and slaves, and 12 children by three wives. The Society of Mareen Duvall Descendants erected several historical markers in the area, including one near Davidsonville at  the site of Middle Plantation, where he died.

From Mareen Duvall’s 12 children sprung a huge clan whose members intermarried with many important Maryland and Virginia families.

Robert E. Lee DuVall was born about 1869 to wealthy plantation-owner and Confederate officer Ferdinand DuVall and Annie Linthicum Duvall. They lost their estate, centered in what is now Crofton, Anne Arundel County, after Ferdinand DuVall’s death in 1878; Robert, his mother and sister emigrated to Oregon, but he returned briefly, in 1900, to reclaim the family cemetery. Robert, a railroad employee,  died in Shoshone County, Idaho in 1943.

But the youth in this photograph seems a bit too young to have been born in 1869. A second Robert Lee Duvall, born 1875, seems a much better match.This Lee Duvall was the son of merchant Evans Duvall (1839-1911). In 1900 the family lived in Laurel, Prince George’s County.

Lee’s uniform is almost identical to that worn by the cadets of Maryland Agricultural College, precursor to the University of Maryland, College Park, just 13 miles away from Laurel. The college’s 1911 historical pamphlet lists all the graduates of the school from its opening to date.  Lee is not listed, but he may either have taken the preparatory course, or attended without graduating.

The Russell studio was operated by William C. Russell (1843-1900), and by his wife, Mrs. Dora C. (Jose) Russell ca. 1886-1904.  The photographer chose a simple, soft, neutral background, lit from above left, to allow the ornamental pattern of the trim on the youth’s uniform, bright with brass buttons, to shine.

For more about Ferdinand Duvall’s career in the Confederate Army, visit his page on this site devoted to the history of the Second Maryland Infantry, CSA. For more about Mareen Duvall and his descendants, see The Founders of Anne Arundel and Howard Counties by J. D. Warfield, published 1905; and yes, Mareen “the Emigrant,” as he is called, has a page on Wikipedia.