Thanks to a Hagerstown pal, I’ve acquired and am devouring Steve Recker’s wonderful new book Rare Images of Antietam and the Photographers Who Took Them.

A Washington County native, Recker has researched the lives of all the major photographers who took photos of Antietam battlefield: Elias Marken Recher, David Bachrach, W. B. King, J. H. Wagoner, and more.

Recker carefully investigated how each photographer came to take their pictures, and has painstakingly worked to understand what is depicted in each. Also included are some rarely-seen images of the photographers themselves. Some of these cartes de visite and stereoviews have never been seen before.

And you can’t get it on Amazon–only at area bookstores and at Recker’s site, Virtual Antietam. So virtually run, don’t walk, to his site and grab a copy before they sell out.

Read a Q & A with the author on John Banks’ Civil War Blog.

Read an article about Recker and his career in the Hagerstown Daily Mail. 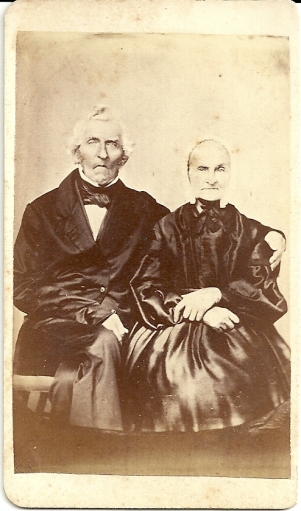 Taken at the Hagerstown, Maryland studio of Elias Marken Recher, this carte de visite photograph was found in an album that belonged to their daughter, Susan Bear (1836-1909) of Hagerstown.

On the reverse is written “Mr. and Mrs. Martin Bear’s pictures taken from a Ferrotype [aka tintype] June 18th 1872”.

According to the 1878 advertisement of the trustees’ sale of Martin Bear’s estate, Bear owned at his death 208 acres about five miles from Hagerstown, where the Williamsport and Greencastle Turnpike crossed the Western Turnpike. The estate included a stone house, orchards, a well, a stream, a barn, etc.

Although I have not yet been able to determine Martin Bear’s parentage, I am guessing that two others who lived close to him–Isaac Bear (b. abt. 1790, Md.) and John Bear (b. abt. 1796, Md.) were his brothers or close relations.

The Bear family may have scattered to Ogle County and beyond, but the affection Martin Bear felt for his wife, even after a long and arduous life together, still feels fresh in this wonderful image.